Learning to paddle: my journey from nowhere to somewhere (and everywhere in between)

A story of anxiety, reflection, appreciation, and equilibrium by Mili Mehta

stuck in a loop

I’ve always specialized in worst-case scenarios. I have for as long as I can remember.

Oh, you haven’t heard from someone in a while. Let me outline every possible scenario for what could have gone wrong.

Sometimes it was reasonable.

He probably lost cell signal while driving through that patch of highway where he always loses cell signal.

But most of the time, any reason was quickly lost under a pile of increasingly catastrophic and seemingly absurd possibilities.

He probably lost cell signal while driving through that patch of highway where he always loses cell signal … and because he lost cell signal and therefore his access to Google maps, he was probably trying to unfold the actual state map (as though anyone has those anymore?) from the glove compartment and wasn’t paying attention to the road … and because he wasn’t paying attention to the road, he didn’t see the crossing cow and proceeded to crash into the cow which totaled his car … but because he didn’t have cell signal, he left the car and began walking along the highway in order to find cell signal but didn’t realize there was a tornado watch …

And so it goes. And so it had gone for years.

I call it the “black hole”, my very own mind spiral. After all, once I was in, there was no getting out again – at least not until reality found some way to break the hold.

In the above scenario, reality arrived in the form of the guy who finally texted me back. He’d just fallen asleep. “Geez, chill.”

For a long time, the black hole ran my life.

Despite my best efforts to stay afloat, I felt like I was barely keeping my head above water, depleted and drained by perpetual worry, insomnia, and eventual rejection in some form or another.

I remember stumbling upon this gif at work. I’d never felt more seen.

That was me, paddling as hard as I could – at work, in relationships – and getting nowhere. Just spiraling deeper and deeper into the black hole.

A few days after discovering that gif, I was still looking at it. I spent hours watching those kids pointlessly paddle for what felt like an eternity – the magic and/or torture of the loop. The longer I watched, the more I saw myself, pushing and pulling with all my might yet continuing to sink further and further and further.

In our introductory call, my now therapist asked me what was going on. My response: “You know that gif of the two kids trying to paddle the sinking boat?” He wasn’t familiar, but he took me on anyway. Three, four, five sessions in – the sinking boat had not come up once.

What had come up, and really what consumed the majority of our sessions for the first six or so months, was my childhood. Not shocking, it is therapy, after all. What was surprising to me, though, was just how much some of my past experiences were reflected in the black hole.

Like all of us, I am lots of different things for many different reasons. But for the purpose of this story, I will note that some of those things include being a child of divorced parents, being the primary support network for a parent living with psychosis during my teen years, and having parents that are all objectively poor drivers.

The details of each of these things are stories for other times. However, there are a few related memories that stand out:

Sound familiar? Scroll back up to the beginning of this story. You might notice a resemblance between the pile of catastrophic and seemingly absurd possibilities and the very real memories I listed above.

As it turns out, the black hole was not the result of me being “clingy” or “needy” or “dumb” or “exhausting” or a whole host of other adjectives I’d either heard from others or come up with myself over the years. Rather, the black hole was a reflection of my very real life experiences. It was my mind’s way of preparing me for possible danger or hurt, given what it knew and based on what had happened to me and those in my life.

The black hole – my spiraling anxiety, the worst case scenario specialist – was my mind’s attempt to brace me for what could happen. And while I appreciated its effort, what it was failing to do was help me deal with what was actually happening.

“Generalized anxiety disorder” was the diagnosis on my therapy bill. The first time I saw it, I googled the code and the resulting diagnosis label and wondered what it meant. What does it mean to have a disorder? What’s the difference between a disorder and a disease? Will I have it for life? Will it get worse? Will it get better? Does it matter? It wasn’t something my therapist and I ever discussed. We still haven’t.

Of course, I could ask about it. But I haven’t felt a need. There are things that I struggle with, and I am learning to deal with them. That’s enough for me today.

And I am learning.

My one-year anniversary of being in therapy marked two important mental health milestones for me:

Around then, my boyfriend and I had an argument. We were moving in together, and he didn’t care whether or not I brought my ice trays with me. The black hole kicked into gear, propelled by all the possibilities for why we were having the argument in the first place.

What was he really trying to say, what did it mean about our relationship, does he even want me to move in with him, and so on.

But this time, possibly for the first time, I wasn’t immediately pulled into the spiral. I held my ground.

Yes, there could be lots of troubling reasons to explain why he doesn’t care about my ice trays OR maybe he simply doesn’t need ice trays.

Oh, the power of “OR”! Such a simple, yet formidable little word.

🎶 “Conjunction junction, what’s your function? Hooking up words, and phrases, and clauses”… and apparently saving Mili’s brain from panic and chaos.

To be clear, getting to “OR” was no easy feat. It took a great deal of work. I spent countless hours in therapy discussing and re-discussing the hows and the whys behind my responses to various situations, which often included not only the black hole but also completely shutting down to the universe around me. Out in the world, at work and at home, I practiced a number of skills to help ground me, including focused breathing to keep me present and saying that magical “OR” statement aloud to maintain my grip on reality.

Writing this today, a few years later, I can’t tell you that my anxiety has been cured. I can’t tell you that I’ve rid myself of the black hole or that I’ve even mastered controlling it. I very much have not. I continue to go to therapy every week, I continue to find myself in situations that activate my mind spiral, and I continue to manage my anxiety to the best of my ability. It’s an equilibrium that ebbs, flows, and includes good days, bad ones, and lots of different ones in between.

But what I can tell you is that I no longer see myself in that gif of those kids paddling and paddling while their boat sinks and sinks. Don’t get me wrong, I’m still paddling, but at least now I can say for certain that I’m getting somewhere. 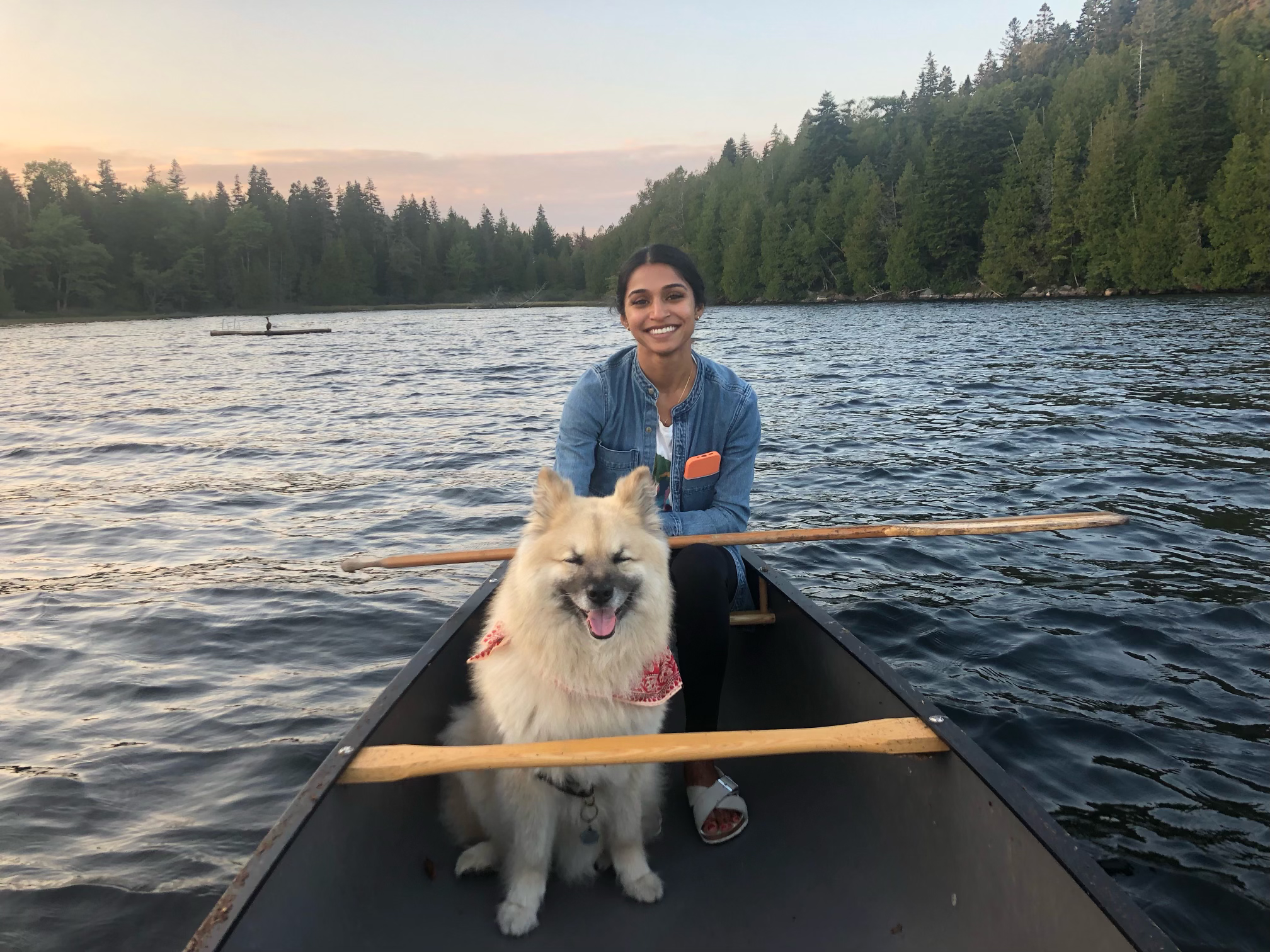